The Skinner Family and The Orchards Golf Course, A lecture by Bill Armistead. 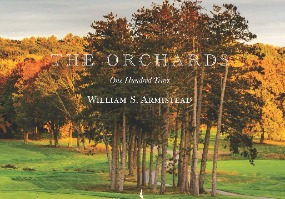 In 1921 Joseph Skinner was living in South Hadley with his wife, Martha, and their second child, Elisabeth. Three of their children had married and moved out the estate, but Elisabeth, never married. When not helping her mother cope with debilitating rheumatoid arthritis, she was playing golf at Mt. Tom Golf Course. But that was a 20 minute car ride away, and Joseph wanted a convenient place for her to play. So he called Donald Ross to design and build a course across the street from his home. The family named it The Orchards.

In addition to the Skinner family, the lecture and slide show covers the career of Donald Ross, who lived in Holyoke for four years. By using Ross’s blueprints and period photographs of horses pulling sleds, Bill documents the course’s creation. He discusses Jimmy and Minnie Young, who ran the club for 38 years, and Mount Holyoke College, which has owned the course since 1941. Finally, Bill will share photographs from the two USGA championships contested on the property, in 1987 and 2004.

Bill Armistead is a retired businessman, having spent his career in corporate finance, including stints at Lockheed Martin, MCI, and a start-up telecommunications company. For five years he taught Finance at American University in Washington, DC.

His mother was Peggy Skinner Armistead, who grew up at Dogwood, a large estate off of Northampton St in Holyoke, which was owned by her father, William Skinner II. Elisabeth Skinner was Bill’s great aunt.

He served on the boards of Wistariahurst and Berkshire Hills Music Academy, which owns the former Skinner estate in South Hadley.

Bill recently published a book, “The Orchards…One Hundred Years,” which he wrote in celebration of The Orchards’ centennial year. He is considering a book about another golf course.