A Brief History of Holyoke 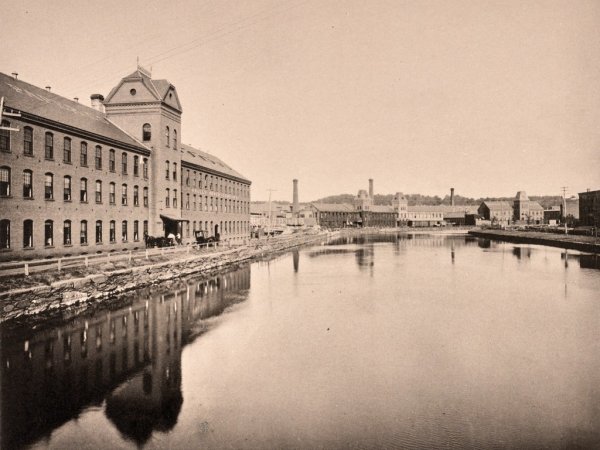 From the Holyoke Public Schools

Holyoke is a densely populated city of approximately 23 square miles, with most of its approximately 40,000 residents in the urban core, industrial, commercial and suburban half of the City between the river and mountain range.

Before European settlement, the area that eventually became the City of Holyoke was used by Native Americans of the Algonquin and Iroquois tribes for hunting and fishing. Holyoke was first settled in 1745 and was officially incorporated as a town in 1850 and later as a city in 1873.

The first of several dams was constructed in 1848 by a group of wealthy Boston businessmen to take advantage of a 57-foot drop in the river level. The water power created by the dam was transferred to planned industrial sites through an extensive series of 3 level canal systems of 7.5 miles of hand dug canals and raceways to bring that power to machine mills and factories. The businessmen also planned and built a system of gridded streets, factory worker housing and building lots for grander homes for factory owners, giving Holyoke the moniker of being the first planned industrial city in America. At one point, more than 25 paper mills were in operation in Holyoke, annually producing the greatest tonnage of paper of any city in the world giving the city its nickname of “Paper City”. During the 1900’s, there were more millionaires per capita in Holyoke than anywhere else in the country. Although there are no longer any paper manufacturers, the dam, canals and much of the industrial and commercial architecture remain intact. The history of paper related manufacturing continues with a strong base of paper converting in place of the former paper manufacturing. Today, Holyoke continues to strongly reflect its industrial history with many of the mills and associated housing still standing in and near downtown. In addition to the industrial hometown, Holyoke also has a reservoir system that is home to much of the Mt. Tom range and home to other natural assets. Today over 60% of the energy used in the city still comes from hydropower, now a state of the art dam system on the river.